Big Green Coach is the official coach partner Tottenham Hotspur Stadium. As such, we are operating official coach travel for the Anthony Joshua OBE IBF, WBA, WBO and IBO World Title fight against Oleksandr Usyk at the stadium.

OFFICIAL TICKET AND COACH PACKAGES ON SALE FRIDAY AT 2PM.

All coaches to this event will be carbon neutral.

All coaches are timetabled to arrive in plenty of time before the show and to depart after the action has ended. Let Big Green Coach take you to the fight and back home again, stress free. 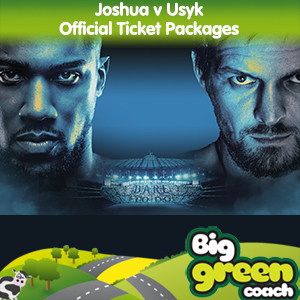